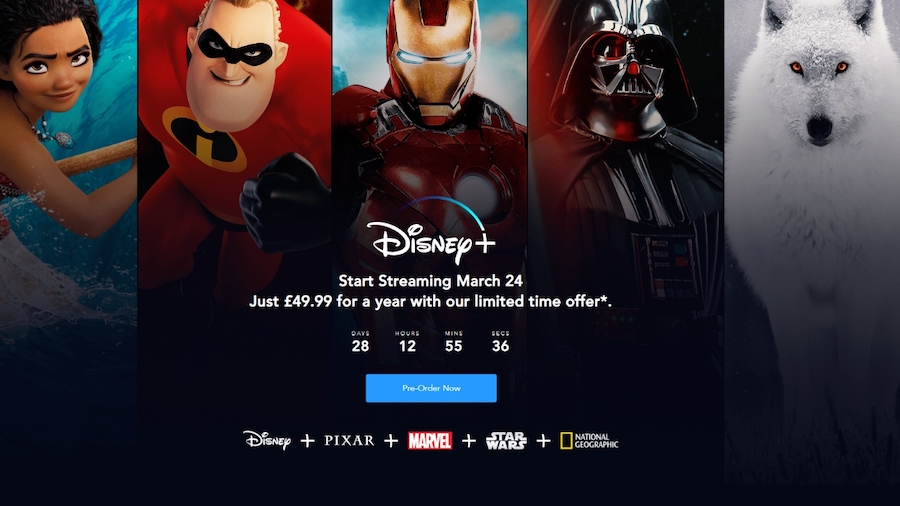 Disney Plus, the most promising contender to Netflix is coming to the European markets a little bit earlier than expected. Disney’s streaming service was launched late last year and is currently available in five different countries including the United States, Canada, the Netherlands, Australia and New Zealand.

The Disney Plus service is launching on March 24, 2020 to customers in the United Kingdom, Germany, Italy, France, Austria, Switzerland, Ireland and Spain. This is one week earlier than the initial March 31 launching schedule.

Disney Plus Pre-order Discounts for EU and UK

As part of its launch incentive, Disney Plus is offering 10 euros or 10 British pounds discount on a yearly subscription for users in these countries who pre-order starting now.

Disney has sent its European waiting list customers about the limited deal which brings the annual price down to just £49.99 or €59.99 giving them a special price of around £4 or €5 per month.

Customers in Belgium, Portugal and the Nordics will only be able to sign up to the Disney Plus service after the March 24th launching in the countries we’ve mentioned above. This means that they will not be able to avail of the pre-order discounts.

As of this writing, Disney+ has not announced which movies and TV shows will be available for streaming in its European service. We’re speculating that the much-loved Star War’s spin-off, The Mandalorian will be available and probably The Simpsons.

Now is surely the best time to try the Disney Plus service if you are in Europe.

How to Enable 2FA on Twitter Without a Phone Number

How to Set up and Use Metered Connection in Windows 10

How to Fix Server or Network Temporary Error 502 in Gmail

Microsoft is rolling out Windows 10 Insider Preview Build 19041.1 (20H1) to Fast and Slow ring insiders, that includes more languages for the Quick...

Google just made a big announcement that it's making its premium video conferencing service, Google Meet - free for everyone. The tech giant wants to...
Load more

Fix Links Not Opening on Slack

How to Remove, Hide or Disable Math Solver Feature on Microsoft Edge Browser

How to Set up & Activate Google Assistant on Sonos Device

How to Set up & Use a VPN Service on Chromebook Computer