What is Blue Screen of Death (BSOD)? 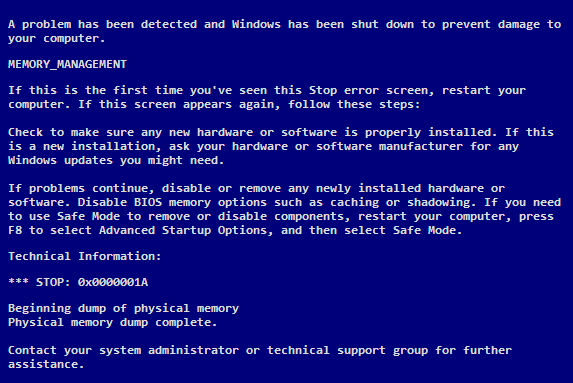 Blue Screen of Death (BSOD) is a Windows error screen shown to indicate system conflicts and the possibility of a crash. The term takes its name from the fact that these critical messages were displayed on the blue screen.

BSOD errors include system hardware, temperature, time, resources, corrupted registry or viruses. The BSOD error is used as a warning to prevent further damage to the computer and system. BSOD blocks Windows and requires the system to reboot before it can continue.

Blue screen has become less common now that operating systems can handle many errors with no interruption.

The Blue Screen of Death is also known as a STOP error.

What Causes the Blue Screen of Death?

Blue screens are usually caused by issues with computer hardware or the hardware driver. More often than not, they can be caused by problems with low-level software running on the Windows kernel. Normal applications usually cannot cause blue screens. If an application crashes, it does so without having to bring your operating system with it.

A blue screen appears when Windows detects a “stop error”. This critical failure is the reasons why Windows stops working. The only option for Windows this time is to reboot your PC. This can lead to loss of data as programs are unable to save their open data.

When a BSOD appears, Windows automatically creates a “minidump” file containing lock information and saves it to disk. It can display information about these minidumps to help you determine the cause of the blue screen.

BSODs also look a little different depending on the version of Windows you are using. In Windows 7 and earlier versions, the blue screen looked a lot like the terminal screen, where all the necessary information was displayed.

You can see some of the most common stop error codes below:

What do you do when Blue Screen Happens?

Try to remember what you did on your PC before you see the blue screen. Were you playing a game or just opening a document? Have you watched videos or attended video conferences? Answering this question can be a good indicator of why the blue screen appears. Write down your last action in the best possible way. Ideally, you should also know which programs have been opened.

Check the temperature of your PC. Abnormally high temperatures may cause insufficient ventilation. This may be because there is not enough space for air circulation. For example, dust pollution also has a significant impact on the temperature and performance of the system and can therefore cause damage to equipment. In this case, the blue screen is often used as a “precautionary measure”.

How do you Restart your PC with a BSOD Error?

How to Troubleshoot and Fix BSOD Problems?

Since the blue error screen offers no choice but to restart, troubleshooting may be difficult. Luckily, almost all these errors include a hexadecimal stop error code that can be used to find a solution.

How Can you be Protected from BSOD?

There is no way to fully protect yourself from the Blue Screen of Death, as internal errors may also occur through no fault of your own. This can be due to a faulty update or spontaneous device failures. However, there are several methods that you can use to avoid losing important data and reduce the likelihood of a blue screen.

Back up your files and documents. Since blue screens are often indicators of hardware failure, including hard drive, you should back up all important data to the drive externally. Back up your files to external drives or in the cloud so that potential system failures don’t cause as little damage as possible. The fastest way to do this is with the Windows Backup Tool. You can then create a recommended or configured backup of the files on the selected hard disk.

Use up-to-date antivirus software with an active scanner or firewall to protect against viruses, malware, etc. For most of the time, these malicious apps cause critical system failures, forcing Windows to respond with a BSOD. There are also instances where malware imitates the blue screen to mislead and deceive the user.

Keep your computer clean at all times. Make sure that the fan runs smoothly to avoid malfunctions of the device. Turn off your computer when not in use. Remove unnecessary software and monitor processes in the background. Do not click on suspicious links on the Internet and, if possible, download only from trusted sources. Careful handling of your computer and its contents will significantly increase its lifespan and reduce the likelihood of system failures.

Blue screen errors are very disappointing, especially since they can stop you from effectively troubleshooting the error. These errors can shorten the life of your PC if the neccessary actions are not taken.

As already mentioned, there are many BSOD error codes that indicate the cause of the blue screen. If you are looking for a solution to any BSOD errors you might encounter, you can do so by browsing through our posts.

How to Fix Dropbox Error 400 Message

How to Fix YouTube Google Error 400 on Android, PC or Smart TV Device

How to Add or Remove a Keyboard Layout in Windows 10

If you have installed the Windows 10 Build 17063 and up, you would notice that the classic Control Panel options is replaced with a...

Advanced SystemCare 14 is a compelling all-in-one PC optimizer that refines your PC. This powerful one-click approach intelligently scans and tends all aspects of...

Disable YourPhone.exe Process from Running in the Background

Some users are freaking out by seeing the process called YourPhone.exe in their Task Manager. You might be one of them and wondering what...

The Importance of Backing up your Microsoft Office 365 Data

Risk mitigation is as crucial in a business as implementing strategies and policies. In every business policy, there are underlying risks that we must...
Load more

Android Games Will Be Available for Windows 11 – What are the Most Popular Genres?

How to Clear or Remove Cell Formatting in Microsoft Excel

How to Fix Discord Crashing 404 Error when Playing Valorant

How to Add, Install, Use Google Meet on Windows PC or Mac

How to Change Date, Time or Location of Photos in iPhone with iOS 15

How to Fix Black Transparent PNG Background in File Explorer

How to Find Weak Points and Rebuild your Business