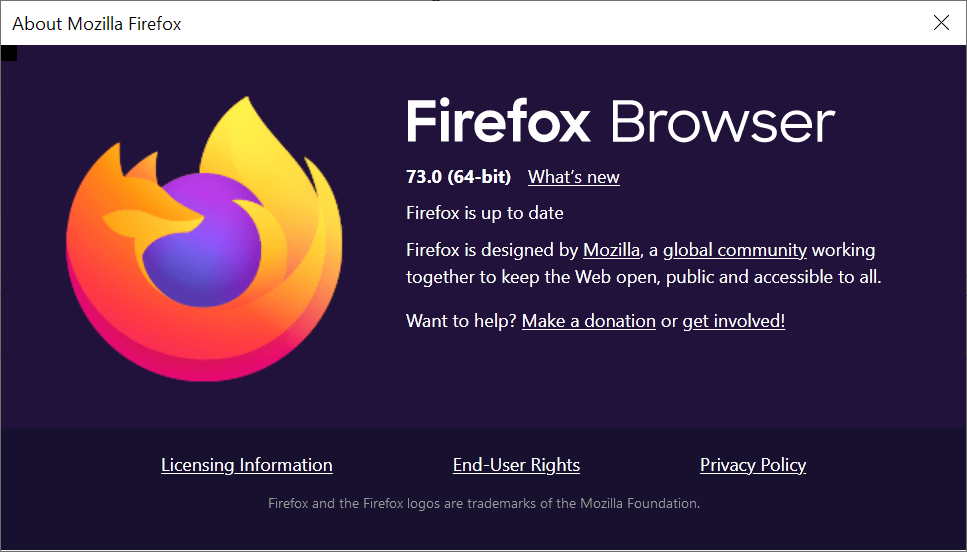 Firefox 73.0, the latest major version release of the Firefox browser is being rolled out today, February 11, 2020. The newest release is packed with cool new features that will make the user-experience in browsing website content more secure and easy.

Firefox is a fast, feature-pack browser that offers security and privacy protection to the next level. It sports a sleek design with browsing speed and security that is at par (if not better) with Chrome and other major browsers.

Users with 0patch security software may experience startup crashes after upgrading to Firefox 73. This will be fixed in a future version of Firefox. As a workaround for this, you can add an exception for firefox.exe in the 0patch settings.

Firefox 68.5.0 for Android will also be released today. This version includes various stability and security fixes. Within the year, Firefox is rolling out Firefox Preview, an all-new Android browser that will replace the current Firefox for Android. As part of the preparation, Mozilla adds an improvement to messaging card on the homescreen to display a message that will inform users about upcoming releases.

To learn more visit these Firefox official pages on the Mozilla website:

How to Get Rakuten Kobo & Save with Student Discount Offer

How to Find Your Spotify Wrapped 2019

If you are a fan of Doctor Who, there is a new site where you can get cool and awesome stuffs for free. BBC has...

Moz Academy, the education arm of MOZ now offers all of its courses for free. This move is in line with the Coronavirus (COVID-19)...
Load more

LastPass Restricts Free Plan to 1 Device Limit: What You Need to Know

How to Fix Windows 10 Plugged in But Not Charging Issue

How to Enable Grid View or Tiled Layout in Google Meet